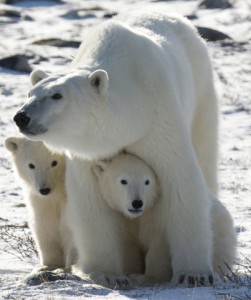 New evidence suggests that the polar bear, Ursus maritimus, or the sea bear, started to evolve about five million years ago from brown bear ancestors. Unlike their land-based cousins, polar bears are superbly adapted for survival in the Far North on a sea ice habitat.

Polar bears top the food chain in the Arctic, where they prey primarily on ringed seals. They reach these seals from a platform of sea ice.

Adult male polar bears weigh from 775 to 1,200 pounds. A few weigh more than 1,200 pounds, but these individuals would be exceptional. Females normally weigh 330 to 650 pounds. It’s not uncommon for female polar bears preparing to enter maternity dens in the fall to weigh over 600 pounds.

Females usually bear two cubs. Single cubs and triplets also occur depending on the health and condition of the mother. Cubs stay with their moms for up to 2-1/2 years, learning how to hunt and survive in the harsh arctic environment.

Polar bears live in the circumpolar north in areas where they can hunt seals at openings in the sea ice called leads. They are found in Canada (home to roughly 60% of the world’s polar bears), the U.S. (Alaska), Greenland, Russia, and Norway (the Svalbard archipelago). Scientists have identified 19 populations of polar bears living in four different ice regions in the Arctic.

Although popular art and children’s books often show polar bears and penguins together, the two live at opposite poles. Polar bears live in the Arctic. Penguins live in Antarctica. 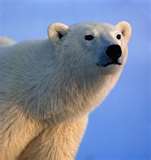