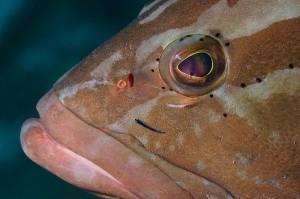 The Nassau grouper is a member of the diverse fish family of Serranidae, in the subfamily Epinephelinae, which is known as the groupers. They are a large fish attaining a maximum length over 1m. (3.3ft.) and with a thick body they can weigh as much as 25 kg. (55 lbs) (Heemstra and Randall 1993). They are a light brownish-yellow with 5 dark brown bars on their body and have a black spot on the top of the caudal peduncle. They also have two distinct dark bars on their head, with one running from the tip of each side of the snout through the eye and joining on top of the head in front of the dorsal fin, and the second starting out as a single bar leading from the top of the snout, splitting between the eyes, and continuing up the front of the head to give the appearance of a “tuning fork” (Heemstra and Randall 1993). Individuals from deeper depths, may have a pink to orange color on their ventral side(Heemstra and Randall 1993). Individuals may also change their basic color from white to dark brown depending on their environment or mood. When individuals meet they may take on a “bicolored pattern” where the top half of the body is dark brown to black and the lower half of the body, the tail, and a bar running from the snout through the eye up to the back of the head are white. This bicolored pattern is taken on usually by smaller individuals and is to show a submissive or non-aggressive state (Heemstra and Randall 1993). 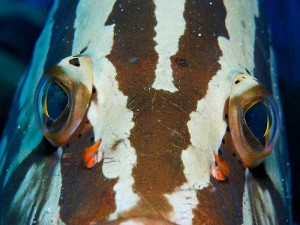 The Nassau grouper is a solitary predator which hunts during the day. Large adults mostly feed on fish, smaller individuals will feed on fish, crustaceans, and octopus, and juveniles feed mostly on crustaceans (Heemstra and Randall 1993). They live in a defined territory, where it usually rests on the bottom or under ledges. It uses its ability to change color to camouflage itself, and waits for prey to swim by. It then will quickly chase down its prey and by opening its mouth and expanding its gill covers, it creates a large vacuum, which will suck in its prey whole(Bestor ????).

The Nassau grouper can be found from eastern Florida and Bermuda, through the Caribbean, down to Venezuela, and found as far west as the Yucatan Pensisula, but is not found in other parts of the Gulf of Mexico. More may live as far south as Southern Brazil, but this has not been able to be confirmed (Cornish and Eklund 2003). Juveniles are commonly found in shallow seagrass beds close to shore, while adults live on offshore coral reefs and rocky substrate. They are found in shallow waters as well as depths of over 130m. (426ft.) deep (Cornish and Eklund 2003). 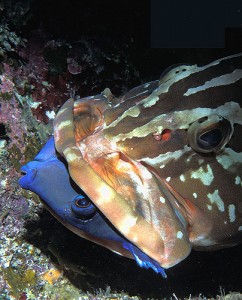 Like other groupers, and many other marine fish, Nassau groupers are protogynous hermaphrodites. Individuals are born as a female and then after time as they get bigger and more dominate, they will switch sex and become a male. This transformation may occur between 30 and 80 cm (1-2.6ft) (Heemstra and Randall 1993).They may spawn as a female only once or many times before they change sex. Afterwards they will spawn only as a male. However, it has also been discovered some individuals are male and have never gone through a female stage. These are referred to as primary males, while males that were females first are secondary males. The primary males are smaller than secondary males(Heemstra and Randall 1993).

Nassau groupers are aggregate spawners, where many individuals will leave their territory to meet other members of their species to spawn. Unlike most groupers that spawn in small groups, and travel short distances, Nassau groupers may travel over 100km (62mi.) from their territory to spawn (Colin 1992). These aggregations can number from approximately 20 to several thousand individuals, with one observation of 30,000 to 100,000 individuals in the Bahamas (Smith 1972). These aggregations occur at traditional aggregation sites along the outer reef shelf at a depth of 20-40m. (66-132ft.). The sites are visited every year in December through February during the full moon (Heemstra and Randall 1993). Currently there are approximately 60-80 known spawning sites (Whaylen et. al. 2004). 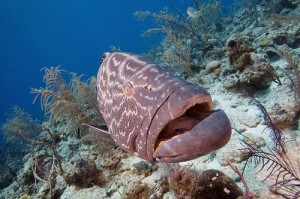 Spawning starts at sunset as most males and females will display the bicolored pattern and hover near the bottom, along with some females in a dark barred pattern. Groups of 3 to 25 individuals will display courting movements including: vertical spirals, short vertical runs with rapid crowding and dispersal of individuals, and horizontal runs near the bottom. Mating occurs when a dark female rushes forward and up, with several bicolored males following, releasing sperm into the water in a white cloud, along with other bicolored females releasing eggs (Heemstra and Randall 1993).

The eggs are fertilized in the water column and will eventually become planktonic larvae. The larvae, if they survive, will eventually settle as juveniles near coral in seagrass beds or macroalgae. Settling juveniles are approximately 32mm. (1.25 in.) in length. Once juveniles reach 12-15 cm. (4.7-5.9 in.) they move from the seagrass beds to the nearby reef (Bester ????). 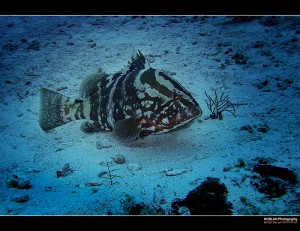 The Nassau grouper has been one of the most important food fish in the Caribbean (Heemstra and Randall 1993), but do to overfishing its numbers have declined by 60% over the last 30 years (Cornish and Eklund 2003). It is one of eight grouper species that the World Conservation Union (IUCN Red List) has listed as being endangered or critically endangered (Cornish and Eklund 2003). Most fishing occurs by a variety of methods including hook and line, spearfishing, fish traps, and even gill nets. Most of the fishing occurs during the spawning aggregations, where numbers are high which improve the chance of catching fish. However, this strategy has put a dramatic pressure on the population, as many of the spawning aggregations have been fished to commercial extinction or disappeared completely (Whaylen et al 2004).

This sudden drop in numbers has caused many places to limit or stop fishing entirely. The U.S. stopped fishing for Nassau grouper in 1990, and is now considering putting it on the Endangered Species List. Mexico banned fishing of it during spawning aggregations in 1997. Other bans on fishing during spawning have been enacted in the Bahamas, Bermuda, Belize, and the Dominican Republic (Cornish and Eklund 2003). In the Caymans Islands there is an 8 year fishing ban that was enacted in 2003, prior to this only locals were allowed to fish during the spawning season and only with hook and line. However, even with this rule, many fish were caught, as in 2002, when 13 boats caught 1934 fish of an estimated aggregation of 5,200 individuals (Whaylen et. al 2004). Even in some places where fishing has been banned, there is little enforcement (Cornish and Eklund 2003).

Colin, P.L. 1992. Reproduction of the Nassau grouper, Epinephelus striatus (Pisces:Serranidae) and its relationship to environmental conditions. Environmental Biology of Fishes 34:357-377.